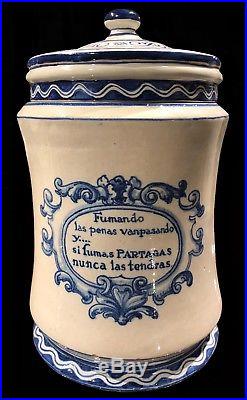 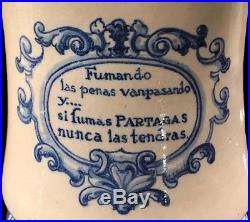 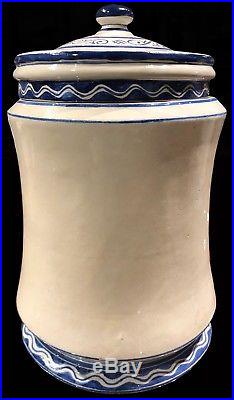 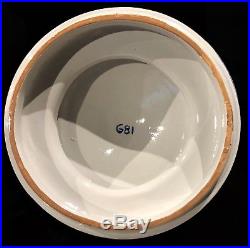 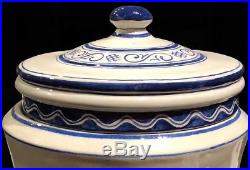 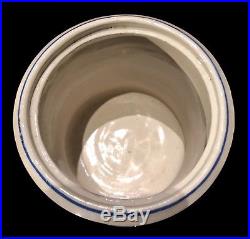 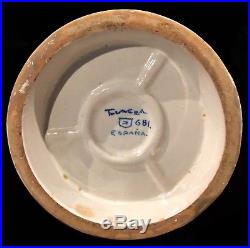 ON SALE – THIS WEEK ONLY!!!! ANTIQUE 1920s PARTAGAS TALAVERA BLUE CIGAR HAVANA HUMIDOR JAR Cuba 1920s. RARE AND UNIQUE ITEM IN THE HISTORY OF CUBAN CIGARS – THIS PIECE IS ONE OF 1,000 LIMITED AND NUMBERED PIECES MADE IN SPAIN IN THE 1920’S. Up for sale is an AMAZING and SUPER RARE ITEM of CUBAN TOBACCO and CIGAR HISTORY. You are going to be the owner of this ANTIQUE and GENUINE PORCELAIN. HUMIDOR made especially made for WORLD FAMOUS CIGAR brand PARTAGAS during the 1920s. The PARTAGAS CIGAR brand, founded in 1845 by Don Jaime Partagas, is one of the oldest and most luxurious of all Cuban cigar brands ever created and is still being made today. It is one of the 5 top FLAGSHIP brands of both the CUBAN and DOMINICAN Cigar industry. This type of PORCELAIN HUMIDOR was especially designed in a LIMITED NUMBERED EDITION of ONLY 1,000 pieces for the Cuban Cigar brand PARTAGAS one of the most famous and biggest cigar factories in Cuba during the Pre Castro era and one of the world’s oldest cigar factories, too. This is both a BEAUTIFUL and RARE ANTIQUE that collectors must have either for DECORATION PURPOSES as well as functional to use for a chance to enjoy the old style that Cigars Aficionados used to store and age their prized cigars. To use as a humidor, they would put a wet sponge inside the inner lid area which will keep the cigars inside from going dry and to keep them ready for smoking. This Gorgeous Museum Quality example of Cuban Cigar History is numbered 681 in both the upper lid and on the bottom of the jar below a matching numbered set from a series of only 1,0. 00 PIECES made almost 100 years ago. Sadly, very few complete sets exist today as alot of these BLUE PARTAGAS JARS simply got lost or were completely destroyed. Some mismatched number sets exist and more are available without the lid as it was easy to drop or get knocked off. Recent interest in these over the last decade has lead to Reproductions being made in Talavera. This one appears to have had the lid replaced but was done so at the same maker identical to the original. CONDITION: This VERY RARE CIGAR JAR item is with minor wear in overall used but EXCELLENT CONDITION: NO severe dents, cracks or damages. Lid is a reproduction made with matching number and identical to original. Possibly one of the best potters in the world of all time. This SUPER RARE and ANTIQUE PORCELAIN JAR measures app. 8 1/2 inches high x 4 inches of base diameter and is in overall GOOD condition despite tremendous age. We are glad to send more photos of all item details if requested. HISTORICAL BACKGROUND: Cuban PARTAGAS Cigar brand – The Spaniard Don Jaime Partagás Ravelo had worked in the Cuban tobacco business for years before establishing his own factory, Real Fábricas de Tobaco Partagás, on 60 Industria Street in Havana, one of the largest of its time. The name, which translates as “Partagás Royal Tobacco Factory, ” was supposedly chosen because of Don Jaime’s status as cigar supplier to various European and Asian nobility. Don Jaime owned many of the best plantations in the Vuelta Abajo tobacco-growing region of Cuba and being able to choose from among the finest tobaccos on the island made the brand incredibly successful. Don Jaime is also believed to have experimented with various methods of fermenting and aging tobacco and is legendarily credited with hiring the first lector to read to and entertain the cigar rollers as they worked. Don Jaime was murdered (supposedly by a jealous rival he’d been vying with in one of his love affairs) on one of his plantations in either 1864 or 1868 and his son José Partagás took over the business. In 1916, Don José Fernández seems to have left the firm and Ramón Cifuentes Llano joined with Francisco Pego Pita to form the new firm of Cifuentes, Pego y Cía. In 1927, the firm would acquire the rights to the Ramón Allones brand and at some unknown point the factory began to produce a brand named for its owner, Cifuentes. Cifuentes died in 1938 and Pego in 1940, leaving the Cifuentes family solely in control of the increasingly-prestigious factory and brand (it’s unknown why Pego’s heirs didn’t claim anything) and renaming the company simply Cifuentes y Cía. In 1954, the Cifuentes family acquired the Bolívar and La Gloria Cubana brands from José F. Rocha and moved their production to their factory. In 1958, the Partagás Factory was the second largest exporter of Cuban cigars the H. Upmann Factory being the only one bigger, accounting for over a quarter of all exported tobacco goods. This is an ORIGINAL and AWESOME ITEM for any serious collector of HISTORICAL CUBAN TOBACCO and VINTAGE HAVANA CIGARS dont` miss it! Need to know more? Are interested in other items? The item “ON SALE! ANTIQUE 1920 PARTAGAS TALAVERA BLUE CIGAR HAVANA HUMIDOR JAR” is in sale since Thursday, May 17, 2018. This item is in the category “Collectibles\Tobacciana\Cigars\Cigar Boxes”. The seller is “ujnyc” and is located in Fort Lauderdale, Florida. This item can be shipped worldwide.